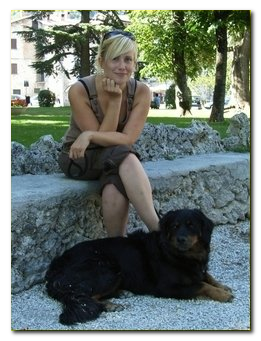 My name is Eefje van Sloten-Bronsveld and in 2007 I founded DogLogix. Before being in the position to found this company, I was schooled in theory and practice in many aspects of the canine world.

After starting in 1999 as a volunteer in the Animal Shelter in Zoetermeer I was given a permanent position in 2001. My experience in this animal shelter taught me there should be no need for most dogs to end up in a shelter. If only dog owners had easy access to expert advice and support when training their dogs, Animal Shelters could be a thing of the past.

After leaving the Animal Shelter in 2002 I worked 3 years as an instructor at the Dog School Vlietstede. During my years at the Dog School, I studied with institutions like Kynotrain and O&O and obtained various certificates and diplomas.
In these years I trained groups of owners of pups, young and more mature dogs. For most owners and their dogs, group training is a good way to practice for a lot of dogs and there owners

Unfortunately, some owners and/or their dogs need more individual attention. There are times when a dog has problems concentrating when confronted with one or more other dogs either due to fear or an overdose of animal spirits. In other cases the dog has severe behavioural problems which need solving before introducing the dog into a group. Sometimes it is the owners who need extra coaching due to, for instance, language and/or special interests and needs.
These special cases attracted my attention and formed the encouragement I needed to specialise in dogs or owners who are exceptions to the general rule. I decided to study Canine Behavioural Therapies at the Martin Gaus Behavioural Institute. In 2006 I sat the final examinations for these specialist courses and obtained the diploma cum laude.
From 2014 onward I have been working for the Behavioural Institute to help students with there case studies. And give the oral exams.

My own dog James came to an animal shelter in Zoetermeer when he was only 5 months old. For his age, he had an extensive list of behavioural problems. He had fears and phobias which resulted in aggressiveness towards other dogs and humans. He and I developed a bond and eventually I was allowed to adopt him. In the years he lived with me, I worked hard to solve his problems and I was able to put the ideas, theories and therapies from the Martin Gaus courses into practice as soon as I became acquainted with them. Thanks to this, James changed into a happy, companionable dog who was my friend and in many ways also my partner! In my practice as Canine Behavioural Therapist I could use James as a partner to teach other dogs how to modify their behaviour. He used his body language to teach and support other dogs in their interaction with the outer world.

Immense sadness came when James was diagnosed with a tumour on his heart in 2012, he passed away in my arms a month before his twelfth birthday. He will always remain my inspiration when helping other people and their dogs.

For questions and/ or making an appointment you can reach me by phone, email, Whatsapp and text message. In case you have a private caller ID, refrain from calling and please send a text message or an email instead. I will contact you as soon as possible.