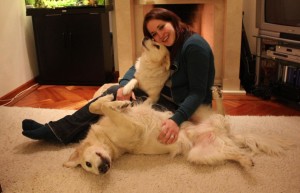 Rose de Villeneuve was employed by DogLogix from 2010 until April 2012 when she moved back to Breda. She was one of our dog walkers and obedience trainers and was also involved with board and lodging of dogs.
As her name and photographs are visible on our website and in the blogs but primarily because we are pleased with the work she did for us, she will always form a part of DogLogix. Here follows her story:

I studied Veterinary Homoeopathic Medicine at the Silverlinde institution in Breda, the courses included animal medication but also behavioural aspects and various types of massage and homoeopathy for animals.
During my courses I did practical work at various dog schools, at Vlietstede amongst others, during which I gave lessons regarding TTouch massage for puppies.
I also learned a lot during practical work in Cernavoda, Romania, for the “Save the Dogs, Italy” project. Most of my work there was related to observing, socialising and training a gang of dogs and a nest of motherless pups staying in an Animal Shelter. During this time I met a dog I named Alaska and a cat I named Granger. After thinking about it for a long time I decided to take them back with me to The Netherlands. They are still part of my household.

My first dog, when I was 3, was a Labrador Retriever called Spot – so I grew up with him and learned a lot about having dogs. When I was 17, I adopted a Golden Retriever called Djarda. We followed lessons at a dog school where Eefje was an instructor. Djarda had serious behavioural problems: he was fond of the chase and would run away! With lots of patience I was able to change this around and it was an enormous relief when we were finally able to go for walks without the lead.
When Alaska came back with me she also had many problems: she was scared of virtually everything, was badly socialised, had had no house training and had a fixation on eating. It took a long time and lots of patience to change this. She is house trained now and much more self reliant. I still train daily with my dogs, partly to maintain what I have taught them before and partly because I love teaching dogs and observing the positive changes in their behaviour.

Animals have always formed part of my life and it is wonderful to make this hobby into a career! I do not just train the dogs of our customers: I have a real relationship with them. I am able to give the dogs the attention and love they deserve precisely because DogLogix is not a large scale organisation. I enjoy helping the dogs and their owners overcome their daily problems.

For questions and/ or making an appointment you can reach me by phone, email, Whatsapp and text message. In case you have a private caller ID, refrain from calling and please send a text message or an email instead. I will contact you as soon as possible.